There is a lack of reliable and accurate mechanical characterization techniques for porous ceramics used in regenerative medicine applications. The compressive mechanical characterization of highly porous ceramics is problematic due to sensitivity to stress concentrations and localized fractures. In our research, we focus on mechanical properties of highly porous barium titanate foams, a material shown to be promising for bio-medical applications. We propose new measurement methods for characterization of compressive behavior of such highly porous brittle materials. More specifically, to obtain crushing or collapse stress and the effective compressive modulus of these structures. A high modulus epoxy is applied which confirms to the surface irregularities and also provides enough rigidity for uniform loading of the foam samples. By having a more reliable measurement technique we focus on the effect of microstructure on these mechanical properties. We demonstrate the control of the microstructure of barium titanate foams by controlling grain growth rates during firing. We utilize a modified version of two-step sintering to achieve foams with much smaller grains, not achievable through conventional sintering.

Schematic of conventional and modified compressive testing of foams

Monolithic catalysts are becoming increasingly attractive as novel reactor concepts, as a replacement for fixed bed reactors consisting of packed beds of pellets or particles which are largely used in industrial catalytic processes. They have various advantages, such as lower pressure drops, high safety, easy catalyst separation and fixed geometry avoiding the danger of channel and dead zone formation. Whereas in the past honeycomb structures dominated the field of monolithic catalyst designs, ceramic foams are meanwhile an interesting alternative. Due to a wealth of preparation techniques, different porosities in combination with high mechanical strengths are achievable. 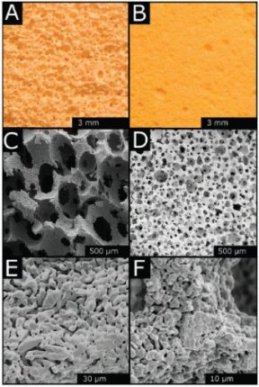 Bone tissue engineering is a growing research area in medicine and engineering. Natural bone substitutes in the form of autografts and allografts are currently being used in patients in order to keep natural bone in the human body. Due to limitations of some grafting methods, there is interest in substituting bone with biomaterials that have similar properties as bone. Though biocompatibility is an important property to achieve for a successful biomaterial, and ideal geometry of a potential bone scaffold is needed to be obtain. In the group, a direct foaming polyurethane method is being used to synthesize a bone scaffold that can be used in bone tissue engineering studies. Preliminary biocompatibility studies have been performed on barium titanate and ceria foams. The data collected was compared to a commercially used biomaterial, Bioglass 45S5. Results showed that the inflammatory response and toxicity results of the barium titanate and ceria foams are lower than the Bioglass 45S5 foams. Currently, the mechanical properties of these bio-ceramics are being analyzed. The goal is to achieve a robust bio-ceramic foam that can withstand the mechanical loads that a patient will have throughout a normal day.

Barium titanate (BaTiO3) foams synthesized via direct foaming method using silicon-free, rigid polyurethane systems (PU), commercially purchased and lab developed, are being engineered for piezocomposites in sonar applications. The mechanical properties of these foams were measured using confined compression testing to evaluate the suitability of these foams for the intended application. Compressive modulus and collapse strain determined from the experimental data increased with increasing density. Additionally, the foams fabricated using the lab developed PU (LPU) showed a higher mechanical strength due to a higher average density than the foams developed using commercial PU (CPU) system. The data was then fit with a phenomenological model to verify the values of the compressive properties extracted from the experimental data and also to extract additional properties such as tensile strength. Based on these findings, it is proposed that these foams can be successfully incorporated into piezocomposites by infiltrating the foams with polymer.

Water pollution by heavy metals presents a large environmental threat. According to the World Health Organization, millions of people around the world are exposed to unsafe levels of naturally-occurring arsenic through their drinking water, which could lead to cancer. The National Academy of Engineering describes access to clean water as one of their Grand Challenges: “About 1 out of every 6 people living today do not have adequate access to water, and more than double that number lack basic sanitation, for which water is needed.” Currently, techniques such as ion exchange, filtration, and chemical precipitation are used to treat polluted water. These techniques have disadvantages, such as high costs and the inability to remove trace amounts of heavy metal ions. Recently, there has been increased interest in biosorption due to the low cost, ease of regeneration, and enhanced adsorption properties of biological compounds. One of these, chitosan, derived from the deacetylation of chitin, has the capability of adsorbing heavy metals. Chitin is found in crustacean shells, and is the second most abundant natural biopolymer, making it a low cost alternative to water remediation. More importantly, from the technical perspective, chitosan contains a reactive amine group, which allows it to bind to metals. Therefore, chitosan can be engineered as an efficient, low cost method to remove heavy metals from water. Chitosan can be processed to form beads, foams, and fibers. Our research plan is to create water filtration systems made of chitosan foams and testing their ability to adsorb heavy metals, specifically cobalt ions. Methods that will be used are high density CO2 expansion and dip coating chitosan onto polyurethane scaffolds. Filters are made by encasing the foams in an additional structural support. Cold-Vapor Atomic Fluorescence Spectrometry (CVAFS) is used to measure the cobalt levels in water before and after filtering.