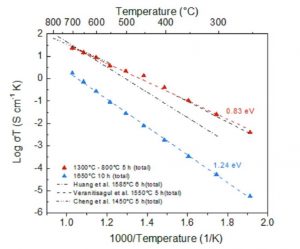 Nanoparticles of gadolinium‐doped cerium oxide (GDC) were synthesized using solvent‐deficient method and their sinterability and electrical properties were investigated using the powder and cold sintering process. The GDC powder was uniaxially pressed into cylindrically‐shaped pellets with a mixture of nitric acid and hydrogen peroxide at 200°C to encourage particle arrangement during forming process. These bulk samples were annealed using two different temperature profiles: at 800°C for 5 hours and at 1300°C for 1 minute—800°C for 5 hours. The samples produced using HNO3/H2O2 mixture showed higher relative density than ones without it. Ionic conductivity of the sample sintered through the two‐step profile was obtained from electrochemical impedance spectroscopy. Although the grain conductivity for the samples (8.0 × 10−3 S cm−1 at 500°C, and 3.3 × 10−2 S cm−1 at 700°C) is on par with a conventionally sintered sample, the measured total conductivity (3.9 × 10−3 S cm−1 at 500°C, and 2.5 × 10−2 S cm−1 at 700°C) is about 10 times higher than the conventionally sintered one and is comparable to the values seen in the previous studies for GDC which employed higher sintering temperature, pointing to the effectively lower grain‐boundary impedance. This result could be attributed to no significant phase segregation along grain boundaries due to the low‐temperature processing.