Urbanization and population increase is expected to cause a substantial energy demand in the coming years. According to the US Energy Information Administration, the United States alone will need 34% more electricity by 2050. This, coupled with the growing demand to decrease the world’s carbon emissions, presents a need to focus on sustainable energy production. Nuclear energy production is a promising process because of its small footprint and low carbon emission. According to NEI, a nuclear facility needs 360x and 75x less space than what is required for a wind farm and photovoltaic plant to produce the same amount of energy. The drastic difference in required land will allow nuclear energy to succeed in locations like urban environments where space is limited. While nuclear energy presents a bright future for clean energy production, the waste biproduct is often seen as a hindrance to this method’s promise. The waste contains radioactive substances that have half lives on the order of a hundred thousand years. Therefore, to expand the use of nuclear energy we must work to develop new materials to contain waste and limit environmental exposure.

We are studying new materials for nuclear waste sequestration and containment that have potential to contain nuclear waste for thousands of years. Clays are proposed to be used as a buffer material in waste repositories to swell between the waste and ground layer to restrict radionuclide leakage. Additionally, the clay can be functionalized to limit the release of radionuclides after the clay buffer is breached with groundwater. We aim to characterize functionalized clays to determine the influence of key parameters on the performance of sequestering technetium and iodine radioisotopes. Our efforts also strive to characterize changes in the microstructure of the clays and success of functionalization through x-ray diffraction (XRD), Fourier-transform infrared spectroscopy (FTIR), scanning electron microscopy (SEM), and simultaneous differential scanning calorimetry and thermal gravimetric analysis (SDT). These characterization techniques give insight into changes in the arrangement of atoms within the material that are then compared to sequestration performance to identify changes that lead to improved performance. Through these methods we are able to track the change in interlayer spacing and arrangement of organic molecules within the clay layers that change the clay characteristics prior to sequestration. Ultimately, we aim to correlate differences in atomic interactions that occur upon functionalization and sequestration to develop a clay with improved long-term stability as a buffer material.

Currently we are studying the functionalization of montmorillonite with alkyl amines that leads to marked increase of the basal plane spacing within the clay. Specifically for an alkyl amine with a 16-carbon chain length, the spacing increases from 1.45 nm to 1.93 nm, potentially opening the interlayer to contain technetium. Additionally, the ordering of the organic within the interlayer is tracked using FTIR where a change in the asCH2 mode to a lower value shows an increase in trans conformation. The larger chain length and greater number of chains leads to greater ordering. Comparing an amine functionalized clay with two chain lengths of differing length, the asCH2 mode is at 2930 cm-1 for 8 carbons and 2918 cm-1 for 18 carbons. An increase in the number of chains from 2 to 4 for a length of 8 carbons also shows a decrease from 2930 cm-1 to 2921 cm-1 .

Nuclear Batteries Based on Radionuclide Nanoencapsulation

A nuclear battery is a device which includes a radiation source that acts in conjunction with a transducer to convert decay energy into an electric current. One of the most important concepts in nuclear battery design is establishing that the transducer dimensions match well with the particle mean free path such that maximum energy deposition is achieved. Many current optoelectronic nuclear battery designs involve a layered structure of alternating plates of radioisotopes, decay energy transducers, and photovoltaic (PV) cells. These layered designs introduce several interfaces at which efficiency loss occurs, as well as create mismatch between the transducer length and the particle range, which results in total device efficiency often less than 2%. Based on advancements in organic semiconductor technology and a novel design which eliminates the interface between source and transducer, with the radionuclide nanoencapsulation (RANA) method we enhance energy conversion efficiency by integrating the source and transducer into a single phase. This concept presents a new paradigm for optoelectronic nuclear batteries which can output efficiency much greater than current state-of-the-art. 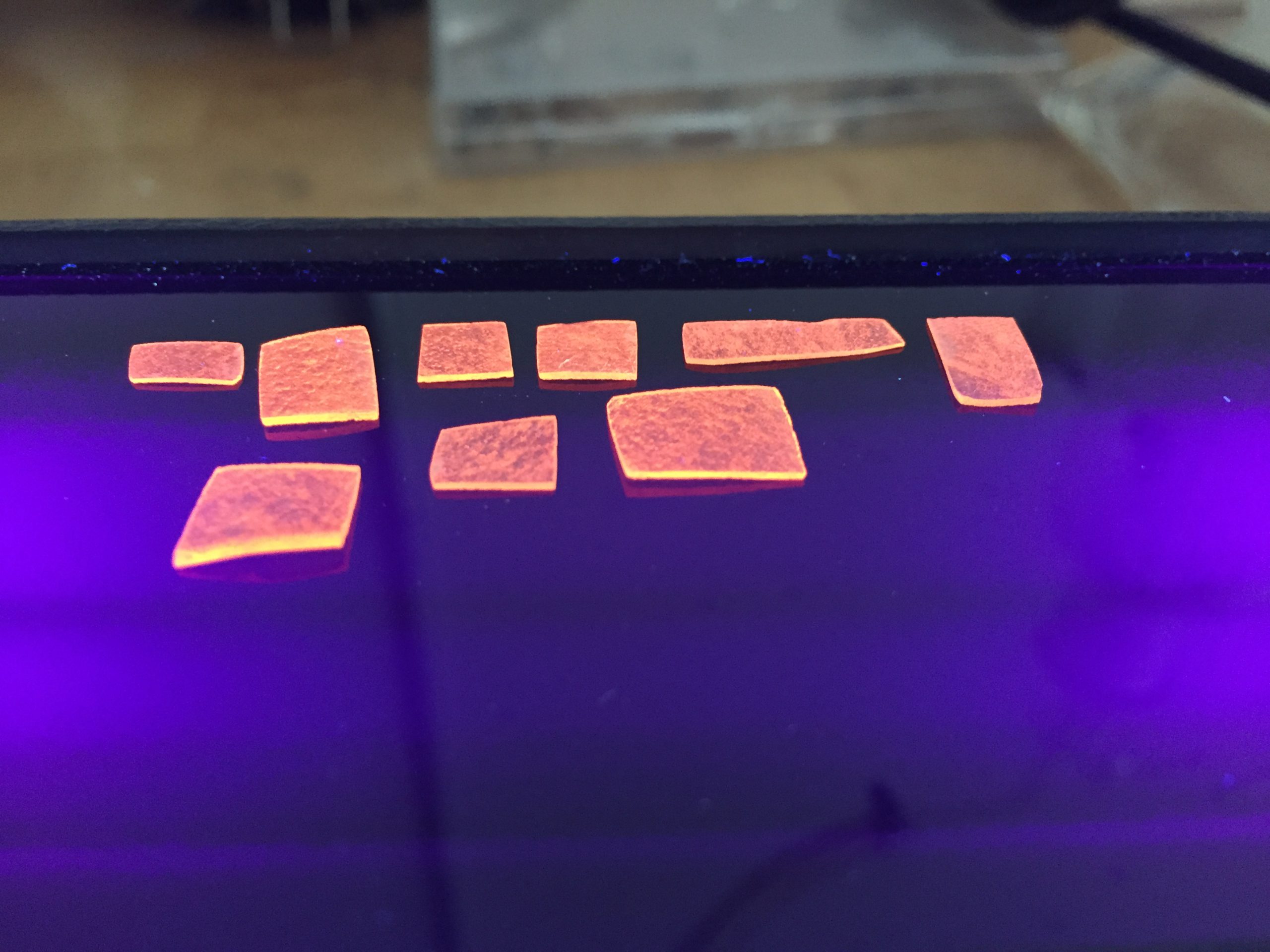 The expansion and commercialization of Generation IV  nuclear reactor designs will require new suitable high performance materials. Specifically, the harsh core environment of these new designs makes material selection very challenging with ceramics among the few candidates providing the desired properties. Silicon carbide is among one of these materials that is very attractive for structural and other applications. However the use of silicon carbide for structural applications is limited due to difficult processing and fabrication. Sintering temperature, usually above 1800°C, as well as the need for high pressure (~50MPa) constitute critical processing drawbacks, while the need for sintering aids such as TiO2, Al2O3 or Y2O3 represents a composition control drawback when purity is a concern. Using a preceramic polymer, polycarbosilane, we are able to reaction sinter SiC at temperatures as low as 850°C. 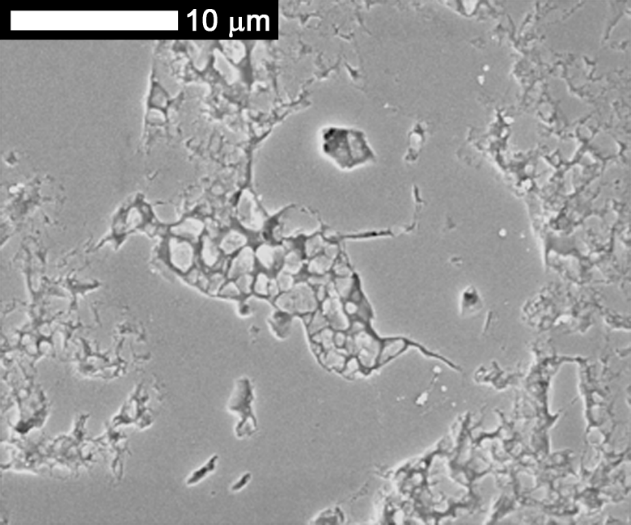 For the UO2 fuel in LWRs, thermal behavior, fission gas release, pore migration, swelling and pellet to cladding mechanical interaction are highly depending on its as-fabricated microstructure as well as the incurred microstructural evolution upon operation history and service conditions. In general, ceramic pellets with large grains are desirable for a high burn up fuel as the fission product diffusion path along grain boundaries is increased and fission gas release is effectively reduced. Our work aims to predict the grain boundary migration, the pore and grain boundary interaction, grain growth kinetics and microstructural evolution in UO2 oxide fuel under the driving forces of high temperatures and large temperature gradients anticipated in LWR fuels. Ceria owing to its similarity to uranium oxide is used as a surrogate oxide to establish protocols. The experimental designs will be accelerated by performing high fidelity modeling to simulate UO2 fuel from fabrication to extended burnups. The modelling will use MARMOT, which is a tool for simualating and understanding how materials such as nuclear fuel change over time and capture the microstructural evolution under irradiation. In effect the work proposes to provide a benchmarked capability for a more predictive performance of nuclear fuels.

The world is faced with a difficult question in the area of nuclear waste. How do we safely dispose of our ever-expanding stockpile of weapons- and reactor-grade radiotoxic nuclear waste in ecologically responsible and economically viable ways? Nuclear waste can be buried in the ground where it is monitored for thousands of years or waste can be “burned” in a nuclear reactor where it is transmuted into less harmful waste. A promising approach for reducing nuclear waste is by utilizing an inert matrix fuel for the transmutation of waste in reactors. The implementation of an inert matrix fuel requires a stable and radiation tolerant material with similar thermal and neutronic properties as UO2. The inert matrix acts as a dilutant for the high radioactive waste that fuels the reactor and transmutes into a shorter half-life isotope. The project goal is to understand the effects of neutron irradiation on ceramic materials structure and properties. Potential inert matrix materials including magnesium oxide-neodymium zirconate cercer composites (MgO-Nd2Zr2O7) and single-phase magnesium-based spinel compounds were irradiated in the Advanced Test Reactor at Idaho National Laboratory. The effects of temperature and time in the reactor on the materials properties are currently being investigated. Post irradiation examination includes thermal diffusivity, scanning electron microscopy, and transmission electron microscopy to determine the structural aspects that lead to irradiation resistance and the effects of irradiation damage on materials thermal properties.