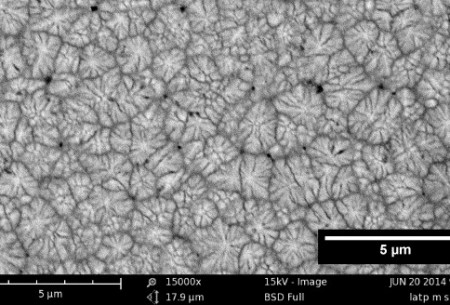 LiO2-Al2O3-TiO2-P2O5 glass ceramics are a promising candidate for the electrolyte in lithium air batteries.  The Nasicon (sodium super ionic conductor) structure of these glass ceramics leads to excellent room temperature ionic conductivity. Microwave heating allows for a novel method to induce crystallization leading to improved properties in this system.  Current research is focused on quantifying the kinetics of dendritic growth of the crystalline phase from the amorphous bulk.  Future work will include investigating the interfacial stability of LATP with lithium metal. 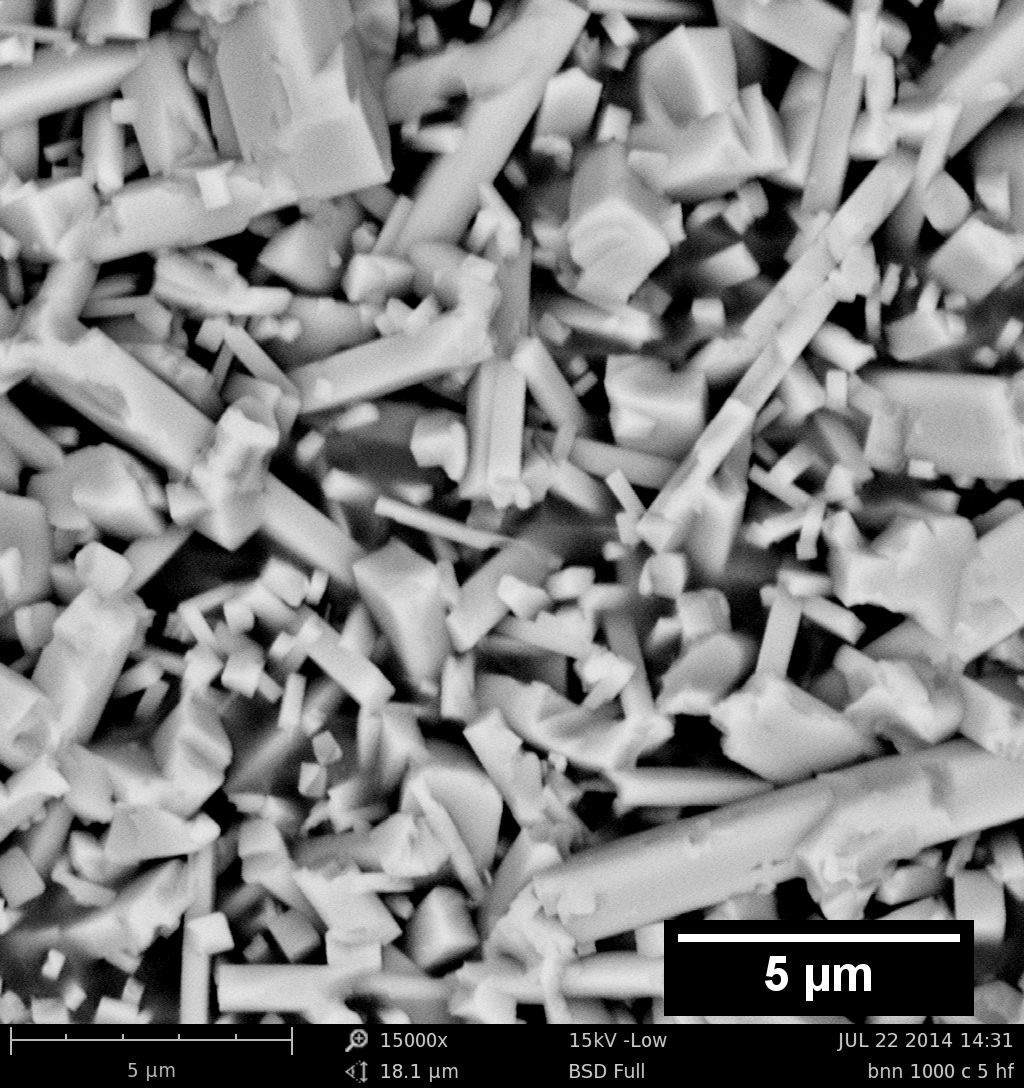 The negative environmental impact and energy security concerns of burning petroleum based fuels have spurred a demand for vehicles that use alternative fuel sources. These alternatives include hybrid, plug-in hybrid, fuel cell electric and pure electric vehicles which rely on power electronics to convert energy from the battery to the motor. In order to make these vehicles more competitive with traditional combustion engine vehicles, the cost and efficiency of the power electronics and electronic machines must be improved. One current goal for this improvement is the reduction of size, improvement of efficiency and operating temperature of DC bus capacitors in the power inverter. One means of achieving this goal is to find materials with higher energy and power density.

Barium sodium niobate (BNN) glass ceramics are composite materials that have the potential to be used in high pulsed power applications, which require materials with high energy density. BNN glass ceramics are part of a class of materials that combine a high permittivity crystalline phase with an amorphous phase that exhibits high breakdown strength. These combined properties lead to composite systems with high energy density. Current research focuses on finding a relationship between the glass ceramic interface and energy storage properties.

Solid oxide fuel cells (SOFCs) have received increased attention in recent years as an environmentally friendly power source, particularly those which operate in the intermediate temperature (IT) range of 400 – 800°C. This is due to their flexibility in design, wider range of useable fuels, and potential uses in distributed and portable power. However, current SOFCs do not provide sufficient power at these intermediate temperatures and must operate at or above 1000°C which is far too high for use in technologies such as fuel cell vehicles (FCVs). A key component of an efficient IT-SOFC is a solid oxide electrolyte with a high ionic conductivity at intermediate temperatures. Our group continues to investigate the properties of rare earth doped ceria, the most promising material for use in IT-SOFC electrolytes. 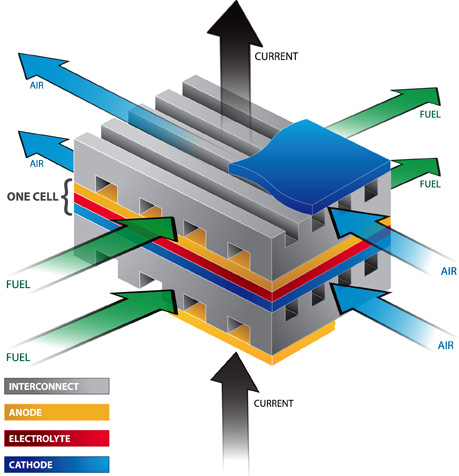 Schematic depiction of the operation of a Solid Oxide Fuel Cell from netl.doe.gov

Barium titanate (BaTiO3, BT) is a material well-known for its excellent dielectric (ε’~3500) and piezoelectric properties, which allows for its utilization in a variety of electronic applications such as capacitors.The high relative permittivity and low dielectric loss of the material are favored in the microelectronics industry since it enables device miniaturization. Abnormally high relative permittivity (ε’~104–105) can be induced in the synthesized nano-crystalline (250 nm) BT ceramic using starting nano-crystalline BT powder and spark plasma sintering (SPS) technique. This extremely high relative permittivity has been referred to as colossal permittivity. SPS is a fast sintering technique that allows for the densification of ceramics while maintaining small grain size due to the short sintering time and relatively low sintering temperatures employed. 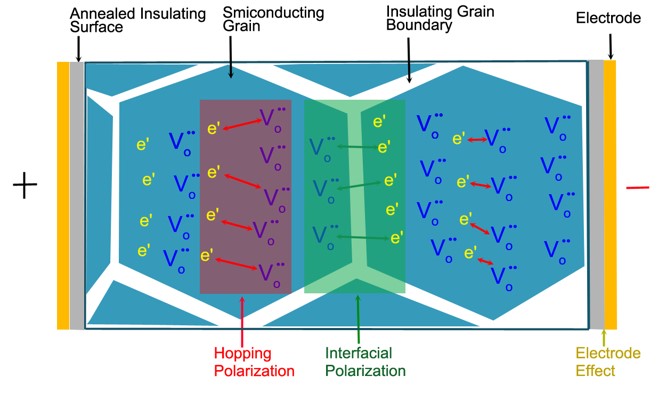 There is currently a great need for the development of piezoelectric materials that are not lead based. One such group of material is the Na1-xKxNbO3 (NKN) system. Current research on this material is focused on growth of the crystal in the <111> orientation. By carefully controlling the temperature and pressure conditions on crystal growth we hope to be able to achieve this orientation via solvothermal and microwave-assisted synthesis. Recent experiments are focused on measuring the dielectric permittivity of a slurry of pure NKN crystals grown through the solvothermal method.

Rather than using the conventional approach to solvothermal synthesis in which a chemical solution is exposed to the environment within an autoclave, our approach has been to instead seal the chemical solutions in fluoro-polymer pouches. This approach minimizes the transient growth conditions caused by particle settling and allows multiple experiments to be run simultaneously. Both endpoints and fractional compositions of the system have been successfully synthesized through this method. X-ray diffraction has shown that this method is successful in eliminating carbonate impurities that are common in NKN growth as a result of reaction with the atmosphere. Additionally, the effect of reaction time on particle size has been documented with the NKN system.

SEM on the Na0.5K0.5NbO3 composition showing the cube-like crystal structure.

Current research is focused on measuring the dielectric permittivity of a slurry of NKN. This is being carried out to better understand the dielectric behavior and near-field particle interactions of the crystal before heat treatments. Measurements across a range of compositions and loading volume are ongoing. Along with dielectric measurements of pure NKN crystals, work is planned to elucidate the oft under-reported thermal properties of this material. Thermal diffusivity, DSC and TGA measurements are planned for future investigation.

Bismuth based pyrochlores have been extensively studied due to their attractive composition-dependent dielectric properties. A combination of high permittivity values (usually above 100), low dielectric loss, and low sintering temperatures (1000°C ± 150) makes them good materials for dielectric components for embedded capacitors and multilayer ceramic capacitors (MLCC). 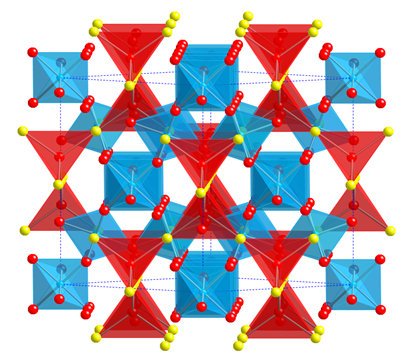