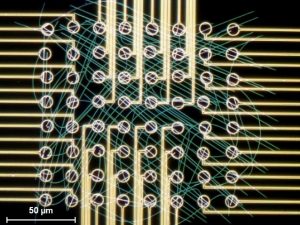 Nanowires especially play an important role in the fabrication of energy efficient, highly dense, and fast neuromorphic devices. In our work, we have demonstrated that Pt core and HfO2 shell nanowires can exhibit eightwise (8W) or counter eightwise (C8W) bipolar resistive switching (BRS) at low potential ranges (±1.5 V), between LRS (~11.2 kΩ) and HRS (~0.3 MΩ). Additionally, due to the symmetric arrangement of layers in the wires along with 8W and C8W switching implies two memristors are connected anti-serially. This configuration results in the wires to exhibit complementary resistive switching (CRS) at higher potentials (±2 V). This ability to switch the devices via BRS or CRS enables us to dynamically control the read-write process. Moreover, due to the transient ON in CRS mode, both the currents and power consumption during the operation of the devices is comparatively lower. In order to assist with electronics integration, we have employed power spectral density (PSD) derived from low-frequency noise corresponding to spatio-temporal correlations. Similar dynamic process are observed in brain waves which may help in optimizing the system. Finally, we use impedance spectroscopy to elucidate the physics involved in BRS and CRS.